Vermont succeeded in promoting itself as a place to visit for recreation and as a rural, agricultural haven. Construction of the interstate highway system turned a visit to Vermont into a day trip for many people in southern New England and New York. But increasing and conflicting demands on the land began to cause environmental problems. The number of small family farms in the state continued to drop, though agricultural output increased. Jobs in the industrial sector declined while white-collar professional and service jobs increased. Textile mills and the machine-tool industry, which were the major employers in the early 1950s, closed and were replaced in the 1970s by IBM and the ski industry. 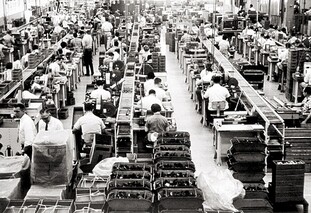 During the 1960s the state began to experience a population boom that continued into the 1980s. A mix of new immigrants flocked to Vermont, including professionals, hippies, homesteaders, ski bums, and well-to-do second-home owners who decided to become permanent residents. Vermont remained one of the whitest states in America with small pockets of people of color living in its cities. Tensions increased between newcomers and natives, not over culture or religion but over land use and politics. Vermonters living in rural farming communities saw their local control eroded and their taxes increased. Newcomers viewed these same changes as part of the process of preserving the environment and making the political system more representative of the overall population. The debate between individual rights and community good continued as Vermonters struggled to balance the ideals of freedom and unity.

Images: (top) Holsteins on a farm in Middlesex.

Coming of the Interstate

Land Use and Stewardship