Freedom & Unity: Coming of the Interstate

We’re on the verge of the greatest development Vermont has ever seen.- George Aiken, opening of Interstate 91 in Putney, 1961 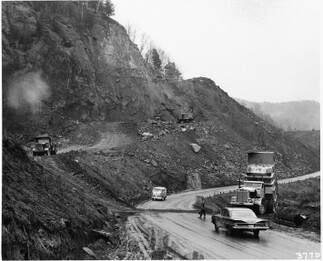 Everyone understood that the federal interstate system would have a tremendous impact on Vermont’s future. The exact nature of those changes couldn’t be predicted, though most Vermonters were optimistic, hopeful, and welcoming of the new highway. Construction began at Guilford in 1957 and ended in 1982 on a final stretch from St. Johnsbury to New Hampshire. Interstates 89, 91, and 93 consist of 381 miles of limited-access highways. Like railroads in the previous century, this new transportation system was a major factor in the transformation of Vermont. It brought to the state economic development, urban growth, and new and different people. Unlike the railroads, however, the interstates led more people to settle in the state as permanent residents, reversing the trend of the past one hundred years.

Skiing in Vermont changed dramatically with the coming of the interstate highway system beginning in the 1950s. In 1947 the state had only seven major ski areas. By 1970 there were thirty-four. The state saw skiing as an opportunity for economic development, spending over $30 million in the 1950s and 1960s on the expanding industry. The impact of skiing on Vermont was uneven but profound. It brought many benefits, such as creating jobs and providing the state with an attractive image to promote. At the same time, the rapid growth of ski towns came with clear social and environmental costs. Commercial and residential expansion created the need for more and better roads, schools, and water and sewer systems, which severely overburdened small-town budgets. Rising housing costs created by a new second-home market drove many longtime residents from their towns, increasing tensions between natives and part-time residents. The need to find a balance between desirable growth and dangerous despoilment in communities affected by skiing was a motivating force behind Vermont’s landmark environmental regulations. Towns were forced to give up some local control to the state since they did not have the resources to solve these problems themselves. 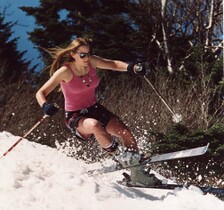 Today Vermont has fewer ski areas, but they are bigger and usually dominate the economy of the towns where they are located. Plans for growth are expensive and cumbersome, requiring resorts to indicate how they will meet a complicated series of local, state, and federal regulations dealing with everything from water use to bear habitat. Though few want to go back to the pre-Act 250 era, the balance between economic viability and environmental preservation is a continuing political struggle.

Images: (top) Section of Interstate 89 between Bolton and Waterbury under construction during the late 1950s.