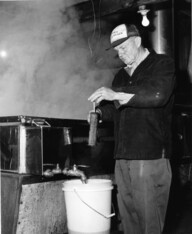 Beginning in the 1960s, Vermont’s population began to grow dramatically. Chittenden County experienced the greatest increase, but small towns with ski areas were also affected. By 1980 Vermont’s population had grown by almost fifty percent. Population growth had both positive and negative consequences for Vermont. The influx of outsiders fueled economic growth in places desperately in need of jobs, but the allure of prosperity was balanced by the degree to which growth undermined communal identity, traditions, and solidarity. As in the past, Vermont had to contend with attacks on minorities or people with different beliefs by those who feared change. 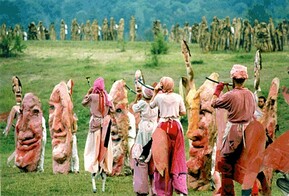 Population growth also threatened those very same attributes of life that so many contemporary immigrants found appealing about Vermont—a small-town atmosphere, a slow pace of life, and a pristine landscape. Residents of the state have always tried to define the true “Vermonter.” Does being a “Woodchuck,” a native Vermonter, give a person more say than a “Flatlander,” a recent immigrant, who has chosen the state as his or her home? Vermont’s rapidly changing demographics made this debate acute in recent times, especially with the increase of local and state regulation affecting the rights of individual property owners.

(bottom) Bread and Puppet Theater performance of the Domestic Resurrection Circus and Pageant in Glover.