The first people of Vermont lived in a climate still dominated by glaciers. Evidence that survives of these people, today called Paleoindians, is fragmentary. Approximately 12,000 years ago the Paleoindians came north, following the caribou herds that they hunted. 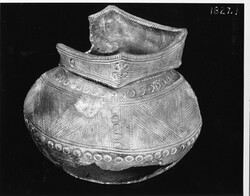 As the glaciers continued to recede, the changing climate produced a new environment. Plants and animals that are familiar to us today began to appear. This era, identified as the Archaic Period, began about 8,000 years ago. The people of this time moved in a defined territory on a seasonal basis, hunting, gathering wild plants, and fishing.

About 3,000 years ago, at the start of an era called the Woodland Period, people began to cultivate plants and become more settled. Though hunting and fishing was still a part of life, raising corn, squash, and beans became a focus of the community. Farming activities took place over three seasons and as a result, the Woodland people established more permanent villages.

Over time, the Woodland people evolved into five different groups characterized by language. Two of these groups live in this region: Iroquoian speakers west of Lake Champlain and Algonquian speakers to the east. The Western Abenaki are part of the Algonquian family, the largest language group in North America.