In the early 1600s, the Abenaki lived in extended family groups of approximately fifty to one hundred people. Villages inhabited by almost 500 people existed in what today are the lands around Newbury and Swanton.

In 1609, French explorer Samuel de Champlain paddled south on the lake that bears his name, beginning two centuries of growing European interaction with the Abenaki of Vermont. 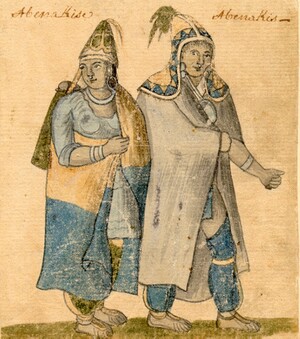 The Western Abenaki experienced great suffering long before the Europeans made direct extended contact with them in the mid-1600s. Contagious diseases from Europe had already decimated their population as explorers passed sickness from tribe to tribe.  Native people of coastal and southern New England, forced out of their homelands by English farmers, migrated north seeking refuge with their kinsmen. French Catholic missionaries came from the north and English Protestants came from the south to try and convert the indigenous people to new religions.

Before long the Abenaki found themselves in a dangerous position between the two European rivals, France and Great Britain. Both claimed the Western Abenakis’ homeland as part of their colonial realms. From the 1680s until the 1760s these European powers fought four major wars.

Early European explorers, traders, and missionaries frequently described cooperation with native people through sharing and trading. Many native people offered services as guides and interpreters. They traded furs for cloth, pots, axes, hatchets, beads, and other goods. Soon the native people adopted these materials and became increasingly dependent on them.  For their part, the French and British quickly learned native ways: traveling by snowshoe and canoe, growing corn and squash, and using fish for fertilizer.

The majority of Abenaki allied themselves with France, feeling that the French had treated them better than the British. The British further alienated the Abenaki by forming alliances with the Iroquois, the Abenakis’ traditional enemy. Most threatening was the expansion of English settlements up the Connecticut River Valley. Again and again the Abenaki, through refugees from southern tribes, saw how the British treated other native peoples, witnessing tribes permanently displaced as English farmers seized their homelands.

During the French and Indian War, many Western Abenaki moved their families to wilderness areas, a traditional survival tactic. Many sought refuge with kin at Odanak in Canada or in New York. When the French surrendered to the British in 1763, the Abenakis were removed from all treaties as their homeland was considered conquered territory. The Abenaki remained marginalized for much of Vermont's history, only becoming recognized by law in 2006.

Image:  Abenakis from one of the French mission villages, circa 1750. Courtesy of Montreal Records Management and Archives.