Historically, the Abenaki believed in one Supreme Being. They honored the spirits of the animals, the plants and the four winds. Mother Earth, Father Sky, Grandmother Moon, Grandfather Sun, and mythical hero Gluskabi were personified to enhance relationships and connections to the environment. 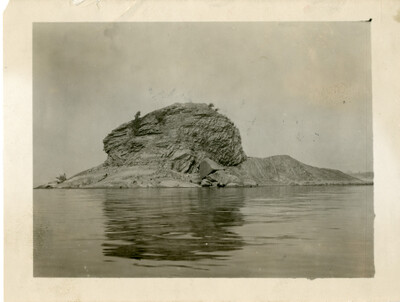 Many place names in Vermont, such as the Winooski (onion) and Missisquoi (flint place) Rivers, have their origin in Abenaki words. A small island in Lake Champlain (Bitawbakw meaning “the waters between”) holds a special place in Abenaki mythology. Although it is now commonly known as Rock Dunder, in Western Abenaki it is named Odzihózo, meaning “He Makes Himself from Something.” The story relates how Odzihózo, an ancient transforming being, created the Champlain Valley by pulling the earth to lift his body. He gouged the river channels with his fingers and created the mountains by pushing dirt with his hands. When he finally stood up, the depression where he sat formed the lake. Odzihózo liked his creation so much that he changed himself into a rock near Shelburne Point so that he could look upon it for all eternity, and he remains there today.

Image: Odzihózo, also known as Rock Dunder, as photographed from Lake Champlain circa 1920. The large rock, standing high above the water near Shelburne Point, is easily visible from the Burlington waterfront. James P. Taylor Collection of the Vermont Historical Society