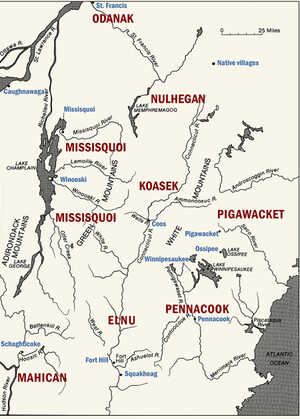 The Alnôbak Wabanakiak inhabit a land they call Ndakinna. This group includes the Western Abenaki, who inhabit the land that today includes Vermont, New Hampshire, north-central Massachusetts, northwestern Maine, and southern Quebec. It is estimated that before contact with Europeans, the Western Abenaki population in Vermont was 10,000.  Today, Vermont's Abenaki, though a much smaller population, live throughout the state.

Historically, the Abenaki lived in wigwams. These circular dome-shaped dwellings were made from available bark and saplings lashed together with strips of spruce roots or babiche (rawhide). Housing one or two families, these semi-permanent buildings were usually found near croplands.  When hunting or traveling, Abenaki built temporary cone-shaped shelters.

Most villages included a larger structure used as a council house or for visiting guests. These elongated bark structures had rounded ends and usually one central fire. 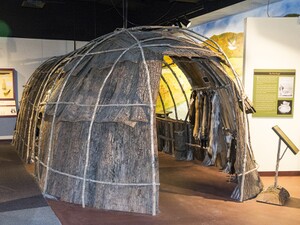 The wigwam in the exhibit is a small version of a council or guesthouse. It has been adapted to fit available space and for accessibility. Made from maple saplings and the bark of basswood and balm of Gilead trees, it's lashed together with deer hide. Greg Osowski, an Abenaki from Holland, Vermont, built it with the help of Rodney Cornell, Brett Farrow, Marc Farrow, Alan Hanks, and Mike Lyon.