Now there is no crop more profitable than this crop from the city, and it is one that comes directly to the farmer, and he should encourage and promote this visiting from our city cousins. -Victor Spear, “Farm Management,” State Board of Agriculture, 1893 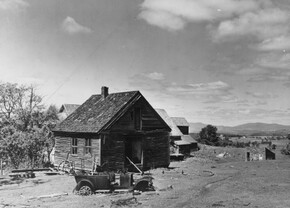 Many of Vermont’s leaders were concerned at the end of the nineteenth century. The state’s farming communities suffered from continuing decline as young, rural Vermonters left the state for better opportunities elsewhere while foreign immigrants moved into industrial areas such as Barre, Rutland, Springfield, and Winooski. Like other places in America during the first half of the twentieth century, tensions arose in Vermont communities between labor and industry, Yankee and immigrant, the rich and the poor.

At this time, the State of Vermont embarked on a campaign promoting tourism to a state which, in many minds, was the ideal of a healthy, rural playground. This image of Vermont grew throughout the decades of the 20th century and still serves as the dominant reflection of our state on the national stage. However, the lived experience of those residing in Vermont could be, and often was, in stark contrast to this rosy reflection. Ask yourself these questions: What was the real Vermont? Who were Vermonters? What is your image of Vermont?

(bottom) Unspoiled Vermont brochure used by the State of Vermont to promote tourism, 1939.

Reality of Life in VT

The Government Lends a Hand

Winning the War at Home