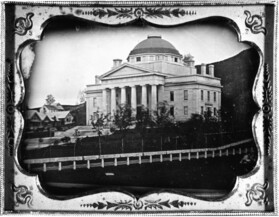 Vermont was changing from New England’s frontier into a stable society by 1820. The period from 1820 to 1860 was a time of peace and prosperity for some, and disorientation and growing inequalities for others. No longer fearing invasion by the British, citizens turned their attention to internal matters. Great changes occurred in the economy, government, religion, transportation, and social and cultural institutions.

Much of what contributes to the appeal associated with Vermont today—the town greens, white-steepled churches, meeting halls, courthouses, and Vermont’s State House—was constructed between 1820 and 1860. These are symbols of an era when Vermonters were hopeful they could create a democratic society that would serve individuals as well as their communities, state, and nation. Yet at the same time, they feared that the changes they were experiencing would disrupt the democracy they were trying to form.

Image: The second Vermont State House was completed in 1838. This rare daguerreotype was taken around 1850.

Choose a Cause, Make a Choice