Both the public and private sectors in the state publicized Vermont as a tourist destination, a rural oasis of white picket fences, vibrant small farms, and quaint villages. The railroad companies were among the earliest promoters, producing numerous brochures and booklets extolling easy access to hotels and amenities.

The state’s first efforts at advertising were undertaken by the State Board of Agriculture, ultimately moving to the new Department of Tourism and Marketing. They included pamphlets not only encouraging people to visit, but also to move to Vermont and buy vacant farms and housing stock. 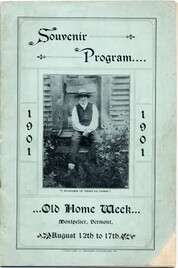 One of the most successful campaigns to attract tourists, Old Home Week, began in 1901. Old Home Week’s goal was to encourage expatriate Vermonters to come back for local celebrations and family and community reunions. Old Home Week was extremely successful during the early twentieth century and to this day some towns continue to have similar festivals.

With its beautiful lakes and healthful mountains, visitors from southern New England and New York saw Vermont as an ideal summer retreat. In the early twentieth century, small lakeside summer communities such as Cedar Beach and Thompson’s Point on Lake Champlain became enclaves of the wealthy. These visitors usually arrived by train and were transported to their cottages to spend the entire summer. Many returned year after year.

Starting in the 1920s, tourism changed as an increasing number of middle-class Americans owned automobiles and gained the leisure time for vacations. Vermont began to promote itself as a destination for one or two-week vacations. Small hotels and guesthouses served visitors on lakes such as Harvey’s Lake and Crystal Lake near Barton. Roadside cottages and tourist cabins sprang up throughout the state. Gas stations and roadside restaurants became increasingly prevalent along Vermont’s more-traveled routes.

Calvin Coolidge, the president of the United States from 1923 to 1929, helped to sell a certain image of Vermont. Even though Coolidge gained political prominence in Massachusetts, he emphasized his Vermont roots and maintained a summer White House in his hometown of Plymouth Notch. 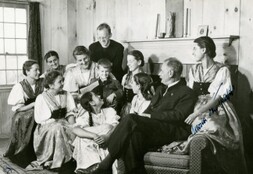 Many famous writers and artists moved to Vermont and promoted the state during the early and mid-twentieth century. These included Dorothy Canfield Fisher, Rockwell Kent, Robert Frost, Dorothy Thompson, Sinclair Lewis, Luigi Lucioni, Norman Rockwell, Paul Sample, and the von Trapp family of The Sound of Music fame. Moonlight in Vermont, made popular in the 1940s by singer Margaret Whiting, captured the romantic rural image of the state that continues to endure to this day.

Images: (top) Souvenir program from Vermont’s first Old Home Week, which began as an effort to encourage natives to return to their hometowns and celebrate their rural heritage.

(center) Roadside businesses like Mallory’s Tourist Place and Cabins in Woodford, offered visiting motorists places to eat, sleep, and gas up their cars during the first half of the twentieth century