As the State of Vermont worked to attract tourists and young residents, many inns and resorts were concerned that the visitors be the “right” kind of guest. Until the Vermont Legislature passed a law ending the practice in 1957, many places of accommodation maintained explicit discriminatory guest practices. Specifically aimed at the growing population of Jewish travelers in the northeast, resorts printed policies directly on marketing materials stating “Gentiles Only” or the more coded “Restricted Clientele.” Officials and business leaders regularly expressed a desire that the Green Mountains not become the next Catskills, referring to them as the “Jewish Alps.” 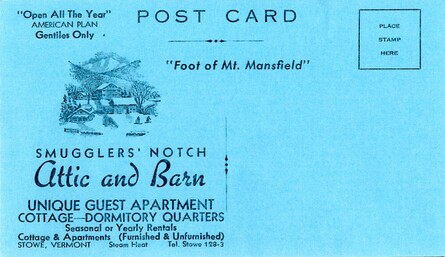 Of the 24 places of accommodation in Stowe in 1946, 20 advertised discriminatory practices. Larry Heyer, owner of the successful Sky Inn, wrote that year, “Frankly speaking, a resort guest establishment must either accommodate all Gentiles or all Jews, as the mixing of the two is disastrous and inevitably results in the loss of the Gentiles... I operate a very successful inn: I do not accommodate Hebrews, and I have a clear conscience.”

The American Jewish Congress asked the governor to intervene in 1952 and in 1955 State Attorney General Robert Stafford declared the practice illegal. Two years later, the legislature codified “full and equal enjoyment of public accommodations” into law.

Image: Postcard from the Smuggler's Notch Attic & Barn in Stowe featuring a "Gentiles Only" restriction.