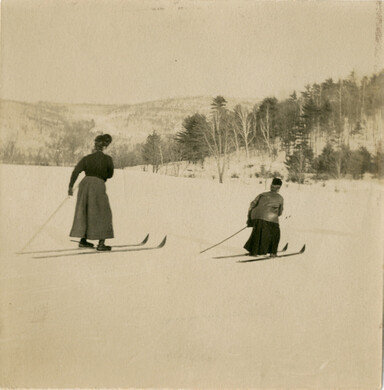 Skiers today would be hard-pressed to recognize their sport in the early twentieth century. Enthusiasts used long, heavy skis with simple strap bindings that attached to any boot along with a single pole used to balance and brake. Purpose-built downhill trails did not exist with most skiers preferring gently rolling open fields. A few adventurers and pioneers did ski in the mountains, but one trip down usually required a day of arduous uphill climbing. Dartmouth College Librarian Nathaniel Goodrich famously skied down the Mount Mansfield Toll Road in 1914, popularizing this emerging pastime.

As skiing became more organized, specialized equipment and clothing became more available and sought after. Ski competitions were organized by regional clubs, focusing mainly on jumping and cross-country challenges rather than downhill skiing. Brattleboro became an internationally famous ski-jumping center in the 1920s.

As improved roads and trails made mountains more accessible, downhill skiing increased in popularity. The first ski trains from Boston and New York began running in the 1930s. In 1933 the Civilian Conservation Corps began to cut trails on state land on Mount Mansfield. A rope tow was installed in 1935 and the Mount Mansfield Ski Club organized the first ski patrol in 1936. By 1940, ski areas included Mount Mansfield in Stowe, Big Bromley in Peru, Hogback in Marlboro, and Pico in Killington. Stowe, which initially depended on barns, spare rooms, and attics to house the weekend crowds, soon began to develop a lodging industry to accommodate the growing number of skiers.

One of Vermont’s most important organizations of the twentieth century was the Green Mountain Club. It played a vital role in publicizing, making accessible, and preserving Vermont’s majestic peaks. Founded in 1910, the club’s purpose was “to make the Vermont Mountains play a larger part in the life of the people.” James P. Taylor, associate principal of Vermont Academy at Saxtons River, called for the establishment of the club and became its first president. The state was divided into sections and each section’s club membership was responsible for opening and maintaining trails and building shelters in the area of the mountains nearest them. 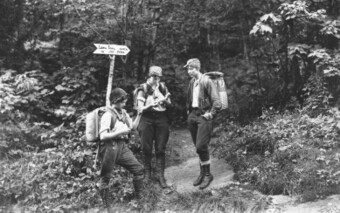 The club’s main project in its early years was to create the Long Trail, a continuous path between Massachusetts and Canada over the skyline of the Green Mountains. The 270-mile trail was completed in 1931. Since 1917 the club has published guides to the Long Trail, and in 1922 it began printing a newsletter. Promotional pieces such as the documentation of three young women, dubbed the Three Musketeers, walking the long trail popularized hiking for many people new to the sport.

Images: (top) Early skiers used a single pole, much like a tiller, to help steer and brake while descending hills.

(bottom) In 1927 Kathleen Norris, Hilda Kurth, and Catherine Robbins, dubbed the “Three Musketeers,” became the first women to hike the length of the Long Trail.

First Ski Tow in the U.S.