Creating an Image: Winning the War at Home

On December 7, 1941, the Japanese bombed the Pearl Harbor Naval Station in Hawaii. The next day Congress declared war on the Axis powers, led by Germany and Japan. Vermonters, along with the rest of America, were called upon to defend the basic ideals of freedom and unity. Though Vermont, like most of the country, escaped the devastation and upheaval suffered in much of the world, its citizens recognized the need to make sacrifices to preserve its society.

World War II was a total war—fought not only on distant battlefields, but also at home on economic, social, and even psychological fronts. The home front in Vermont is a story of patriotism, pride, fear, frustration, and hard work. Vermonters who lived through the war remember feelings of deprivation, camaraderie, and accomplishment, along with constant worry for family or friends in the military and grief when a life was lost.

The arrival of movie stars to sell war bonds created some exciting and entertaining moments for Vermonters during the war. Stars who traveled the state included Bette Davis, Dorothy Lamour, Charles Laughton, and Anne Rutherford. At one rally in Brattleboro a man bought $2,000 worth of bonds for Dorothy Lamour’s handkerchief. These celebrity events supplemented local bonds sales made by banks, post offices, payroll savings plans, and schools. In the eight campaigns held during the war Vermonters purchased $317,179,000 worth of bonds.

Vermonters were also generous in their support of relief aid to the Allies. Bundles for Britain began its work in 1939. The Vermont War Chest, part of a national organization to help refugees, prisoners of war, and other war victims, raised $650,000 during 1943 and 1944. 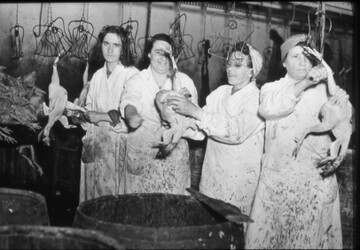 The federal War Production Board (WPB) controlled all industrial production from 1941 to 1945 through contracts and distribution of raw materials. The Montpelier branch of the WPB assisted Vermont companies in getting their share of military contracts, necessary materials, and supplies. In order to survive some companies totally changed what they produced. Labor shortages proved to be the biggest problem faced by Vermont industry, as men went off to military service or to better-paying jobs in southern New England. To meet the need women were hired. Before the war only 17 women were employed in the Vermont machine-tool industry, compared with 528 working as machine operators during peak wartime production.

Farmers benefited from stable prices and an assured market, but farm labor shortages were critical. A shortage of farm machinery and gasoline rationing created further hardships. Farms that depended on hired hands often stopped producing. Even the efforts of organizations like the Volunteer Land Corps, which brought 600 youths from east coast colleges and cities to work during the summer of 1942, weren’t enough to meet the year-round needs of Vermont dairy farmers. Surprisingly, production on Vermont farms increased during the war because of new technology and improved farming practices. Fifty fewer farmers participated in the Bellows Falls Cooperative Creamery in 1945 than in 1941, but they brought in almost ten million more pounds of milk. Farmers were proud of their efforts to support the war, but the long-term legacy was increased involvement by the federal government in agriculture through milk price supports and its promotion of cooperative farming associations.

Over 50,000 Vermonters enlisted or were drafted into military service during World War II. Click here to learn a few of their stories.