Creating an Image: Vermonters Who Served

Over 50,000 Vermonters enlisted or were drafted into military service during World War II. By the end of the war 1,233 Vermonters had lost their lives. Almost every family had one person in the armed forces and many had several. This personal connection was the primary motivation for continuing strong support of the war on the home front. The following individual stories are just a sampling of the many accounts of Vermonters who served in the military during World War II.

Frank Easton of Craftsbury was a pilot before the war, with over 1,000 hours of flight time.  He enlisted for active duty with the U.S. Marine Corps on February 29, 1943 as a second lieutenant. He was assigned to instructor training, upon the completion of which he was sent to train pilots at Bunker Hill Air Station in Indiana for a little over a year. From Bunker Hill he went to Pensacola for fighter refresher training and carrier checkout. All of this was in preparation for combat assignment in the Pacific. As he was finishing his training, atomic bombs were dropped on Hiroshima and Nagasaki. Easton was told that the plane he was to fly was already on a carrier. If the bombs had not ended the war, Easton would have headed for a mission against the Japanese with the expectation of 60% casualties. After the war he served in the Marine Reserves and retired in 1954 as a lieutenant colonel.

Four of Easton’s siblings also served during the war. Charles, Penelope, and Daniel were in the Army, and Roger was in the Navy.

Edwin Little of Fair Haven enlisted in the U.S. Army Air Force in 1942. He became a B-17 Bomber pilot serving in Europe with the 305th Bombardment Group and would survive and finish the required twenty-five missions. He received his own plane in September 1943 and named it the Green Mountain Rambler in honor of his home state. He remained in the service after the war and retired from the Air Force as a brigadier general in 1970. 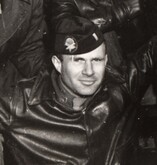 Louis Peck of Montpelier served as a paratrooper in the Army. While jumping into western Germany in 1945 he was shot in the legs by the enemy. In a bizarre twist of fate, a U.S. transport glider landed on top of him as he lay wounded. Peck was in the hospital for two and a half years. After the war he obtained his law degree and eventually served as a justice of Vermont’s Supreme Court from 1981 until 1991.

Related Pages
Back to Creating an Image: Winning the War at Home