Creating an Image: The Government Lends a Hand

A majority of Vermonters, who strongly identified with the Republican Party, didn’t support the Democratic Roosevelt administration, but some New Deal programs were welcomed. Vermonters willingly accepted programs that put them back to work but were wary of major projects that involved loss of local control to the federal government. The Civilian Conservation Corps and the Public Works Administration were crucial in building the state’s infrastructure while providing jobs. The Farm Security Administration and Works Progress Administration were popular programs that helped preserve Vermont’s rural heritage. Programs that directly benefited farmers, such as efforts to control milk prices and rural electrification, also won approval.

Other federal programs that involved land reclamation and resettlement projects were rejected. One of the most controversial New Deal projects proposed for Vermont in 1933 was the Green Mountain Parkway. The limited-access highway would cross the top of the Green Mountains from the Massachusetts border to Canada. The Parkways proponents believed it would create much-needed jobs, increase tourism, and help preserve large portions of the mountains from unplanned development. Its opponents felt the federal money could be better spent on reconstruction of existing roads and bridges destroyed in the 1927 Flood. Furthermore, they argued it would almost split the state in two with few cross roads between east and west, and large tracts of land would fall under federal control. The controversy continued for three years until Town Meeting Day on March 3, 1936. Vermonters said no to the $18 million in federal funds by a statewide vote of 42,318 to 30,897. Vermonters did not want the federal government to become a large property owner or regulator of their land.

The CCC in Vermont 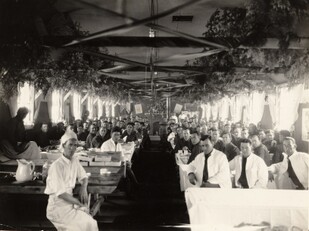 The Civilian Conservation Corps (CCC) was instrumental in making Vermont’s mountains and forests accessible. The CCC was one of the federal public works programs set up under President Franklin Roosevelt’s New Deal. It employed thousands of young men who lived paramilitary style in camps they built around the country. More than 40,000 men, including 11,243 Vermonters, were employed in the state by the CCC between 1933 and 1942. Under the leadership of state forester Perry Merrill, they built bridges, dams, and roads, cut trails to the tops of mountains such as Mount Mansfield, and opened up state forests such as Groton.

The CCC provided men with much-needed jobs during the Depression and enabled some to obtain work skills used in later life. Without the work of the CCC the modern recreational areas of Vermont, especially for skiing, would not have developed as quickly as they did.

George Aiken from Putney, Vermont, served in elective office on the state and national levels from 1931 until 1975. Click here to learn more about his work as a Progressive Republican.

(bottom) The men of Camp Greene pose while eating Christmas dinner at the dining hall in 1933. These men built the Wrightsville Dam and reservoir on lands owned by the towns of Middlesex and Montpelier.