Creating an Image: Reality of Life in Vermont

Vermont had never been a rich state. In bad times its rural people survived by raising their own food and doing without luxuries. In cities, immigrants managed adversity through a system of clubs, mutual aid societies, and labor unions. Throughout the state, the antique institution of poor farms took care of the worst cases. In the 1910s and 1920s, a series of local and national events taxed Vermont’s fragile network of private and public institutions which provided a safety net for those in need. 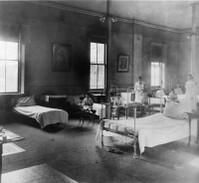 The nationwide influenza epidemic struck Vermont in August of 1918. Almost 36,000 Vermonters, or over ten percent of the state’s population, caught the Spanish Flu with over 2,000 dying in a matter of weeks. A 1919 survey found 440 orphaned children, leading to the founding of the Vermont Children’s Aid Society. The state legislature responded by changing public health laws including the elimination of town medical officers in favor of ten professionally administered sanitary districts. 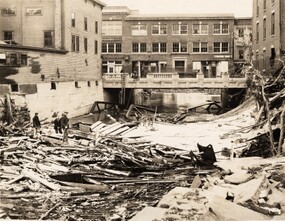 The great Flood of 1927 devastated the state and caused an estimated $21 million in damage. Vermont’s roads, bridges, and railways were so hard hit that local communities could not afford to rebuild. The state legislature passed an $8.5 million bond issue and secured over $2.5 million from the federal government in infrastructure aid.

Beginning in late 1929, the Great Depression struck hardest in Vermont cities. Unemployment led to shrinking tax lists and greater costs for the relief of the poor. In 1932, Barre City could not meet its payroll and called on the state to seek federal aid for the city and other Vermont towns in need. Though Franklin Roosevelt would never win elections in Republican Vermont, several of his New Deal programs provided relief for Vermonters in need.

Though hard economic times caused numerous stresses in Vermonters’ lives, they continued to find joy and support in social celebrations. Urban areas, with their larger populations and diverse neighborhoods, supported numerous social, political, and fraternal organizations. Not only did these organizations provide under-represented groups a voice in labor and politics, they also provided food, fellowship, and social interaction. 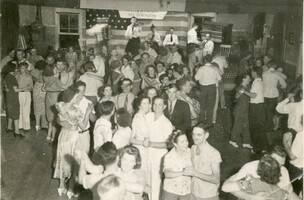 In rural areas, churches, town halls, and farm groups such as the Grange provided community and food support. Church dinners allowed participants to amplify their meager food supplies in a communal and socially rewarding environment. Modes of entertainment that stretched back hundreds of years such as communal music-making, dancing, and sport continued to buoy rural spirits. Harvest festivals, work parties, and “kitchen tunkets” brought joy and support to hard-working Vermonters.

Vermont also grappled with racism, unrest, and xenophobia during these difficult times. Click the links to learn more about:

(center) View of the North Branch of the Winooski River in Montpelier after the 1927 Flood.