In July of 1909 the famed, “Fighting” 10th Cavalry Regiment of the United States Army made its way to a new posting at Fort Ethan Allen in Colchester, just outside Burlington. One of four segregated black army regiments collectively called the Buffalo Soldiers, the 10th made a name for itself on the western plains, in the Philippines, and for charging up San Juan Hill in Cuba alongside Teddy Roosevelt and his Rough Riders. However, it was not its fighting prowess that so impacted Vermont, but the almost instantaneous diversification of Vermont’s largest city.

At the beginning of the 20th century, the greater Burlington area had a little over 100 black residents. When the cavalry came, along with their families and other camp followers, the black population rose to over 1,500. Contemplating this change in demographics, citizen groups and leading newspapers, including the Burlington Free Press and Rutland Herald, proposed Jim Crow laws such as segregated trolleys and other public services. The national press quickly jumped on these racist statements in a state that prided itself on its longstanding anti-slavery and equality stances. Business leaders and state politicians, embarrassed by the characterization, quickly put an end to the discussion of segregation laws and awaited the arrival of the troopers. 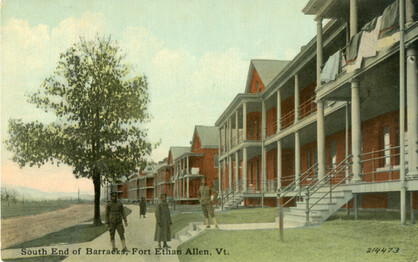 White Vermonters were quickly won over by the professionalism and openness of the 10th Regiment. Troopers participated in parades and civic events, invited the public to cavalry exercises, performed band concerts, and participated in baseball and basketball contests. Though many private businesses maintained discriminatory practices common to the time, during the four years the cavalry stayed in the greater Burlington area, media reported no overt racial tensions or violence. A small, black business community grew up to provide goods and services to the troops. Though it advocated for segregation laws in 1909, the Burlington Free Press, in 1913, praised the troops and extolled the “good-will” that now existed between “the regiment and the people of this state.” The white community extended this praise only after the black troops had proved themselves to be good neighbors. No white regiments were ever required to live up to such standards. The Buffalo Soldiers left Vermont in December of 1913, and were replaced, with little fanfare, by the 2nd Regiment, an all-white unit.

Image: South End of Barracks, Fort Ethan Allen, Vermont [1909]. The image shows a few of the members of the Tenth Cavalry, known as the Buffalo Soldiers.