As the national and international movement that promoted population improvement through genetic control gained popularity in 1926, Henry Perkins, professor of zoology at the University of Vermont, founded the Vermont Eugenics Survey. The research group developed multigenerational genealogical studies of Vermonters in institutions to document hereditary connections with genetic “defects.” 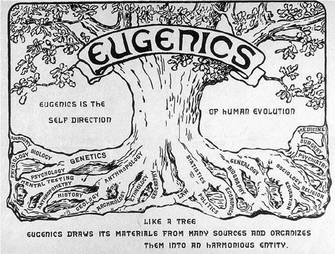 As a result of the Eugenics Survey’s findings and recommendations, a sterilization law was passed in Vermont in 1931, making it the twenty-seventh state in the nation to do so. Meant to keep “bad genes” out of the populace, the program generally targeted minorities and mixed racial groups, particularly Abenaki and French Canadians, as well as poor whites living in rural communities.

The survey also gave rise indirectly to the Vermont Commission on Country Life, a legislated group of committees that would recommend literature, art, educational curriculum, and historical studies that promoted a specific, homogeneous culture in the state.

The Eugenics Survey officially ended in 1936 as its underlying philosophy was used to promote the rise of fascism in Europe, yet its legacy contributed to deep distrust and fear among the groups targeted by the state’s sterilization and cultural program.

Immigrant groups like the Irish, French Canadians and Italians were vital to Vermont’s growth and prosperity. But their Catholic religion, languages, and cultural traditions made them different and most Vermont Yankees considered them outsiders. Many did not believe these immigrants could be trusted to carry on Vermont’s perceived traditional values into the future.

The Ku Klux Klan (KKK) took full advantage of these racist and xenophobic beliefs. In the early 1920s, hundreds of Vermonters joined this organization that persecuted African Americans, Jews, and Catholics. In Vermont, cross burnings and raids targeting Catholic cemeteries and churches took place in Montpelier and Burlington. Eventually city ordinances in Rutland and Burlington banned meetings of people wearing masks or disguises. Boycotts of business owners who were KKK members and newspaper editorials against the Klan effectively shut down the organization in Vermont. However, the bigoted beliefs and emotions tapped by the KKK did not disappear so easily.