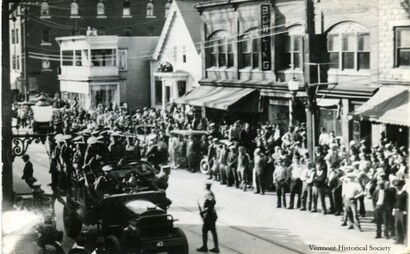 Working conditions in quarries, mills, and factories were hard and when the economy worsened, wages dropped. In Barre, granite workers went on strike in 1915, 1922, 1933, and 1938. The Barre granite strike of 1922 pitted granite workers against owners and French-Canadian laborers brought in to take the workers’ place. It was a bitter struggle with no obvious winners and, as in the past, authorities were called in to break the strike. In 1933, workers struck again over wages and working conditions. The National Guard was called at the owners’ request, even though Barre’s mayor said they were not wanted.

Workers at the Vermont Marble Company struck during 1935 and 1936 over low wages and attempted to unionize. They demanded a raise from 37 1/2 cents to 50 cents per hour. Violence erupted when workers learned that housing rents were reduced as a reward for those who stayed on the job. Rumors circulated that strikers had Communist support. Though the company’s reputation suffered when it issued stock dividends to investors during the strike, the workers still lost. The Vermont Marble Company did not unionize until 1945. 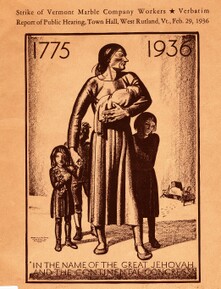 A turning point in labor relations came in 1938 when the granite workers struck again. For the first time, the governor refused to call out the National Guard to put down the strike. Governor George Aiken ultimately offered a compromise ending the strike. Gradually, through the efforts of unions and state and federal regulators, working conditions in quarries, mills, and factories began to improve.

(bottom) Cover of the report of the public hearing on the Vermont Marble strike of 1936. Art and design by Rockwell Kent. This document was distributed nationwide in support of federal labor legislation.