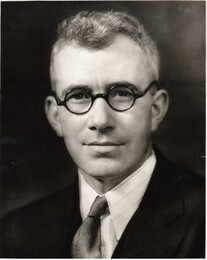 George Aiken, a horticulturist and nurseryman from Putney, Vermont, served in elective office on the state and national levels from 1931 until 1975. He was a loyal Republican his entire life but was often viewed as a maverick within his own party. Aiken and Ernest Gibson, Jr., created and led the progressive wing of the Vermont Republican Party during the mid-twentieth century.

During his tenure as governor (1937–1941) Aiken supported some of the Roosevelt administration’s New Deal programs. He was able to maneuver between the big business interests of his own party and the increasing reach of the federal government into state and local affairs and work for the interests of the average Vermonter. He especially favored the Rural Electrification Administration as a means to get electricity to Vermont farms. Though Aiken viewed federal programs with suspicion, he accepted them when he felt they could help Vermonters. 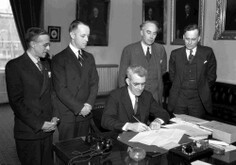 Aiken was elected to the U.S. Senate in 1941 and held that office until 1975. During his tenure he introduced the legislation to build the St. Lawrence Seaway and continued his support of the Rural Electrification Administration. In the 1950s he joined in the censure of Senator Joseph McCarthy, following the lead of fellow Vermont Senator Ralph Flanders. During the 1960s he opposed the rise of Senator Barry Goldwater in the Republican Party.

(bottom) Governor Aiken with others signing the bill for the New York World’s Fair appropriation, April 10, 1937

Related Pages
Back to Creating an Image: The Government Lends a Hand