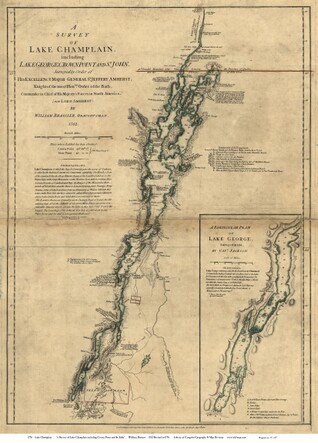 Control of Lake Champlain was a crucial military objective during the Revolutionary War. The British strategy was to unite their Canadian forces with those in New York. If they succeeded they would cut off New York and New England from the other colonies. The Champlain Valley was the site of several bloody encounters. Settlers in this no man’s land fled their homes for the duration of the war, fearful of the British and their Iroquois Indian allies. The British had several victories, but the Americans fought hard and delayed their advance south. These delays allowed the American armies to regroup. When the British were defeated at Bennington and again at Saratoga, they gave up their plan to control Lake Champlain. This was a turning point in the war, as it allowed the Continental Army to turn southward and convinced France to enter the war as an ally of the Americans.

May 10, 1775—The capture of Fort Ticonderoga by Ethan Allen and the Green Mountain Boys was a major victory for America during the early part of the American Revolution.

September 25, 1775—While leading a losing effort against the British at Montreal, Canada, Ethan Allen is captured. He will remain a British prisoner of war until May 31, 1778.

June 1776—The Americans begin building a fort across the lake from Fort Ticonderoga in the present town of Orwell, VT. Later that summer it is named Mount Independence by the troops in honor of the Declaration of Independence. At its strongest, over 12,000 troops are stationed in this fortification. 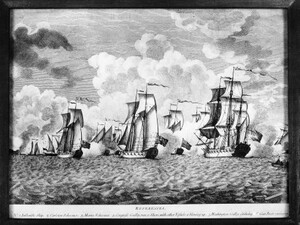 October 1776— The American navy, led by Benedict Arnold, is defeated at the Battle of Valcour Island on Lake Champlain. The British sail down the lake but turn back when they see the fortifications at Mount Independence and Fort Ticonderoga. This delays their advance down the lake until the following year.

July 1777— The British, under General Burgoyne, advance with a 7,000-man army down both the New York and Vermont sides of Lake Champlain. The Americans flee from Fort Ticonderoga and Mount Independence after the British gain the heights of Mount Defiance. By this time, the American forces at Mount Independence are down to 2,500 troops who are in poor condition after suffering through a winter of devastating illnesses.

July 7, 1777— The Battle of Hubbardton is fought as a small force of Americans tries to stop the British from overtaking the troops that are retreating from Fort Ticonderoga and Mount Independence. The British eventually prevail, but it is only after the Americans twice repulse them. The total loss for the Americans is 324 killed, wounded, or taken prisoner, while 183 British are killed. 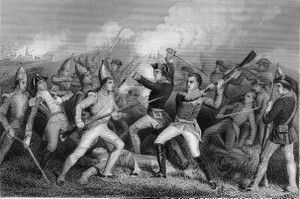 August 16, 1777— The Battle of Bennington is fought when Hessian troops, German mercenaries fighting for the British, are dispatched to Vermont to confiscate much-needed provisions. They clash with Americans just to the west of Bennington. The Americans, predominantly militia from Vermont and New Hampshire, are victorious. Two hundred from the British army die and 700 are taken prisoner. The much-needed supplies never reach the British army, which weakens them severely as they advance on Saratoga, New York.

October 17, 1777— British General Burgoyne surrenders his army of 6,000 men after defeat at the Battle of Saratoga. The Battle of Saratoga marks the end of major military engagements near or in Vermont, but its inhabitants remain under constant threat from British marauders and their Indian allies.

October 16, 1780— A British regiment and nearly 300 Mohawk Indians attack scattered Vermont homesteads on the White River. They terrorize settlers, killing four men, slaughtering livestock, and burning houses and barns. Twenty-seven people are captured and taken to Canada. This incident becomes known as the Royalton Raid because of the extensive damage done to that town.

Fall 1780— The Haldimand Negotiations begin. Leaders of Vermont are fearful of more attacks like the Royalton Raid, and are frustrated by the lack of recognition by the American Continental Congress. They begin talking to Frederick Haldimand, the Governor General of Canada, about rejoining the British Empire. These discussions, along with ongoing talks with the Congress, continue with the British through 1782, but finally end when the Treaty of Paris is signed.

September 3, 1783— The Treaty of Paris is signed, ending the American Revolutionary War.

Images: (top)  William Brassier’s 1762 map of Lake Champlain shows the expanse of Lake Champlain, extending from Quebec to Crown Point. The British believed that if they controlled the Champlain Valley, they could cut off New England and New York from the other colonies.

(middle) This eighteenth-century engraving shows the British defeating the American Navy on Lake Champlain during the Battle of Valcour Island.

(bottom) The Battle of Bennington took place just west of the town when Americans defeated the British army sent to capture military supplies stored in Bennington.