Families from southern New England who settled in the Grants (as the New Hampshire titled lands were known) created communities similar to the ones they had left behind. They were confident that if they moved their families, built farms, and worked the land, their claims would be justified. They believed that the royal governments of New Hampshire and New York, representing the king, wouldn’t deny the rights of citizens who tamed the land, organized governments, paid taxes, and obeyed the laws.

Unfortunately for them, in 1764 the king ruled in favor of New York. New York then began to issue titles to the same land as that occupied or claimed by grantors. Several thousand had already settled in the Grants building farms and communities. Others had invested heavily in unoccupied Grants lands in the north. When the Yorkers (as the New York landholders were called) started to stake their claims, the troubles began.

Yorkers and their supporters were not tolerated. As tensions increased in 1774 and 1775, they were intimidated, taunted, and humiliated. 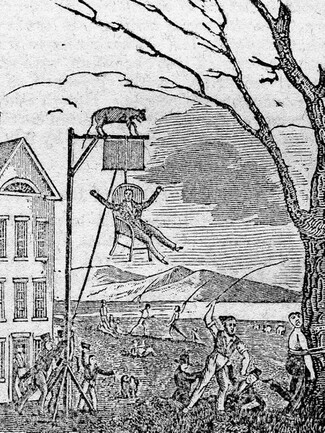 Even Dr. Samuel Adams, a wealthy owner of New Hampshire Grants, wasn’t spared. He was first warned not to speak sympathetically of the Yorkers’ cause or against the violence committed by the Green Mountain Boys. When he didn’t stop, he was dragged to the Catamount Tavern and put on trial. His sentence was to be tied to a chair and hung from the tavern’s signpost, where he was ridiculed for several hours.

His treatment seems mild compared to Benjamin Hough, a Yorker who was jailed for a week, then tied to a tree, whipped 200 times, and finally banished from the Grants.