Grants owners tried to settle their disputes peacefully in the New York courts. They lost. Most were not willing to give up the lands they worked so hard for and many refused to compromise with Yorkers. They were suspicious of New York authorities, considering them aristocratic and self-serving. Many also disapproved of the manorial system of land ownership prevalent in New York. When Yorkers showed up to survey or claim someone’s land they were met by armed men. The homes of some Yorkers who managed to settle in the area were destroyed and the inhabitants were beaten and banished.

Though many Grants settlers didn’t approve of the violence, they felt abandoned and betrayed by their government. Upon the call for independence from Great Britain, they were quick to join the cause feeling they were not being well represented by the Parliament and King. 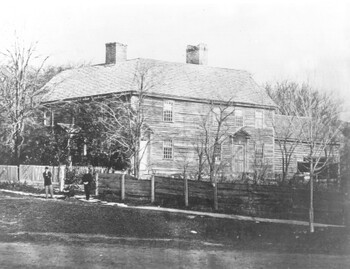 The Catamount Tavern was the gathering place of men who played vital roles in the creation of the state of Vermont. Built in the mid-1760s by Stephen Fay, one of Bennington’s original settlers, it was first called the Green Mountain Tavern. It was one of three taverns in the town that served people journeying to their new homes on the frontier.

When the Grants controversy escalated, patrons placed a stuffed catamount on the signpost of the tavern to taunt Yorkers. Dr. Jonas Fay, Ethan Allen, Remember Baker, and Thomas Chittenden were some of the patriots that gathered in the Catamount’s rooms. They plotted the course of the Green Mountain Boys, the Council of Safety, and later the government of the new Republic of Vermont.

When one hundred unarmed farmers occupying the county courthouse at Westminster refused to leave, a Yorker sheriff ordered his men to shoot them. Panic ensued and forty men, including the wounded, were herded like animals into the courthouse jail and left to die. William French, twenty-two years old, died from a gunshot to the head. Massachusetts and New Hampshire militia did come to the farmers’ aid the next day and arrested the sheriff. The Westminster Massacre of March 13, 1775 is viewed by some as the first battle of the American Revolution. 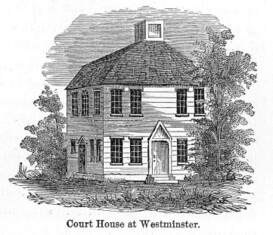 The Westminster confrontation was a continuation of the Grants vs. Yorkers dispute. The farmers needed to put off their creditors until the fall harvest when they would have money to pay off their debts. They resented the New York land speculators they owed and feared being jailed or losing their land. Up until this time, most Grants settlers on the east side of the Green Mountains had peacefully negotiated any disputes with New York. They had not been enthusiastic supporters of the Green Mountain Boys. The New York sheriff’s actions changed their minds, and they were happy when Ethan Allen’s men rode into town the next day.

(bottom) Engraving of the Westminster Courthouse.