When a New York sheriff, leading 300 militiamen, attempted to take possession of Grants farms in 1771, he was met with resistance. A determined group of Bennington militia led by young firebrands Ethan Allen and Remember Baker blocked his efforts. 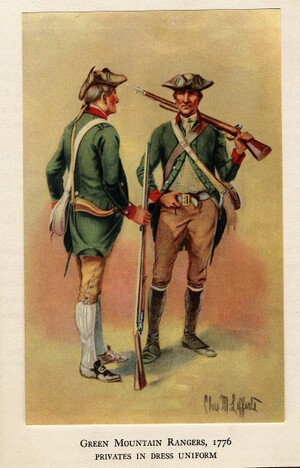 Several Grants towns then organized committees of safety and military companies to protect their interests against the Yorkers. These military groups called themselves “The New Hampshire Men” while New York authorities referred to them as the “Bennington Mob” and rioters. By 1772, they were called the “Green Mountain Boys.”  When they continued to terrorize, beat, and burn out Yorkers the governor of New York offered rewards for their capture and then, in absentia, sentenced them to death. In response, their leader Ethan Allen declared they were fighting for their “liberty, property, and life,” thereby linking the Grants’ cause to America’s fight with Britain. The Green Mountain Boys went on to play pivotal military roles in the independence of Vermont and America’s revolutionary cause.