The suddenness and violence of our freshets increases in proportion as the soil is cleared; bridges are washed away, meadows swept of their crops and fences, and covered in barren sand, or themselves abraded by the fury of the current.- Address by George Perkins Marsh to the Agricultural Society of Rutland County, 1847 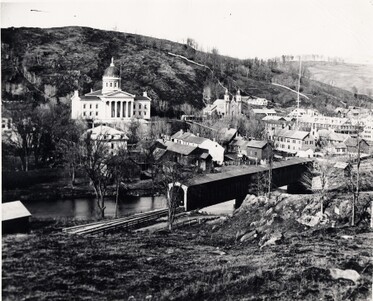 In one hundred and fifty years Vermont’s landscape changed from a dense forest to seventy percent pastureland. The founding generation of Vermonters believed an ideal society was composed of small farms. Property rights were protected at all costs and were only to be interfered with when the well-being of the community was threatened. The vast woodlands were seen as something to be cleared for farmland and a resource to be used for potash, home and shipbuilding, and fuel.

Sheep pastures were extended into the hills, clearing their tops and exposing already fragile soils to erosion by wind and rain. Thousands of cords of wood were cut to supply the voracious steam trains and the growing industrial sector. By the end of the 1800s, the timberlands of the northern forests were being cut and sent south to paper mills or turned into home and building products for the rest of New England. 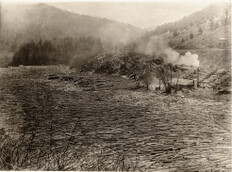 Environmental changes were evident by the decrease in animal populations by the mid-1800s. Catamounts and wolves disappeared as their natural habitats were destroyed. Deer herds were so depleted that hunting them was illegal from 1865 to 1897. Eroding soil-filled streams and fish populations declined. Flooding was becoming more and more of a problem. Vermont’s already marginal soils were being washed away. George Perkins Marsh of Woodstock, an early voice for conservation of the land, began his warnings in the 1840s. In his book, Man and Nature (1864) Marsh cautioned against uncontrolled deforestation and recommended careful management of forests, soils, and the natural watersheds. For the most part, Marsh’s warnings went unheeded, as most people did not share his philosophy. Vermonters continued to use the land as they always had, consuming the natural resources and moving on when their farmland became unproductive.