Commercial agriculture remained a mainstay of the state’s economy, dominated by butter and cheese manufacturing. Centralized creameries were organized to facilitate distribution and eventually manufacturing. The introduction of ice-cooled railroad cars in the 1850s allowed Vermont’s high-quality dairy products to reach an expanding market. By the 1920s Vermont was supplying most of the greater Boston area with its liquid milk. Original innovations that successfully solved the needs of Vermont’s farmers earned national recognition for some of the state’s manufacturers of agricultural machinery. 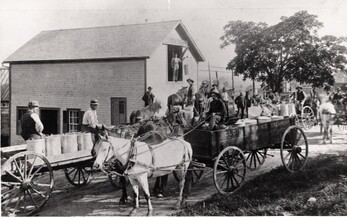 The growth of Vermont’s industrial sector during the last quarter of the nineteenth century was closely tied to the extension of the railroad. Vermont’s natural resources— lumber, granite, marble, and slate—could now reach the booming northeastern cities. Older factories making textiles and machinery expanded because of new markets, but also to support the needs of these extractive industries and their increasing workforces. Vermont’s urban centers grew with new immigrant workers from French Canada, Ireland, Scotland, Wales, Italy, and Sweden. Many native-born Vermonters also took advantage of these new opportunities and moved from the farm to the city.

Men, women, and even some children labored six days a week, twelve hours a day doing repetitive tasks in hazardous environments. Working in quarries, factories, mills, on railroads, or in forests involved moving heavy materials that often shifted or fell unexpectedly, crushing and mangling hands, arms, and legs. Machinery had no guards or safety shutoffs. Textile workers’ lungs were constantly exposed to fiber dust. Granite workers died young from silicosis caused by inhaling the granite dust that filled the air in the finishing sheds. Little or no compensation was available for an injured worker. Mutual aid societies, fraternal organizations, and ethnic societies and clubs had funds, but these were never enough to support an injured worker and his family. 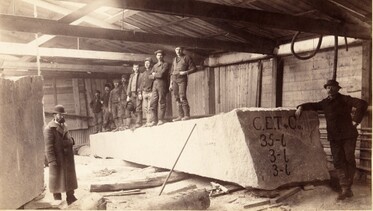 Salaries were determined by owners and could be cut or withheld with little or no notice. When workers at the Ely Copper Mines weren’t paid they went on strike and rioted for a week in 1883. But their fate was the same as the Irish railroad workers who rioted in Bolton for the same reason almost forty years earlier. The National Guard was called in to put down the strike as the militia had done in Bolton.

Like many laborers of the late nineteenth and early twentieth centuries, Vermonters began to join unions. Barre was the best-organized town. By 1900, ninety percent of the granite industry workforce of Barre belonged to one of fifteen unions. But labor’s struggle would be long and progress incremental. The movement received little or no support from the leaders of local, state, or federal government, who viewed labor unions as subversive and radical. Labor organizers and supporters were usually tagged by industry and local press as un-American and under foreign influence, and the expression of this sentiment stirred up the already strong anti-immigrant feeling held by many native Vermonters.