Differences between the North and the South were irreconcilable by 1850. The Fugitive Slave Act, part of the Compromise of 1850 that allowed slave owners to recapture slaves in free states, caused furor in the North.

Vermont protested the law on the grounds of states’ rights, believing that the federal law violated its constitutional stance against slavery. The Underground Railroad, a secret system to transport escaped slaves into Canada, which had been active since the 1860s, became less visible in Vermont after 1850 because of the threat of federal prosecution.

The Kansas-Nebraska Act of 1854 voided the Missouri Compromise of 1820. 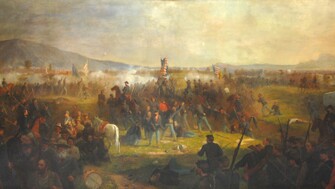 New territories applying for statehood would now determine their own position on slavery. The Kansas and Nebraska territories became the battleground for pro and anti-slavery factions. Vermont had always been against the extension of slavery and many Vermonters moved to these territories to join the antislavery forces.

The U.S. Supreme Court’s Dred Scott Decision of 1857 was viewed by Vermonters as another attempt to allow slavery into the state, violating their constitution. Economic differences over the tariff and support of internal improvements, such as western railroads, further divided the regions. Northern abolitionist John Brown’s 1859 raid on Harpers Ferry, Virginia to supply arms to slaves was the South’s worst nightmare. The election in 1860 of Republican Party presidential candidate Abraham Lincoln signaled the end of the Union for the South. On March 11, 1861, the Confederate States of America approved their constitution and late in 1860 South Carolina seceded, followed by the Gulf States early the next year. The greatest test of freedom and unity was about to begin when on April 12, 1861 the Confederates attacked Fort Sumter. The Civil War had started. 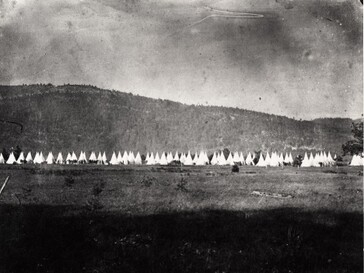 Governor Fairbanks asked the General Assembly to provide men and money for the war. His requests were quickly approved. No one envisioned the long and bloody war. Vermont’s 1st Regiment, composed of men from the state’s various militia units, was activated for only three months. However, it soon became apparent that the war between the Union and the Confederacy would not be a quick fight and more men would be needed.

Over the course of the war, Vermont would raise seventeen infantry regiments, a cavalry regiment, four companies of sharpshooters, four artillery batteries, and a frontier cavalry composed of two companies. In all, more than 34,000 Vermonters served in the military, more than ten percent of the state’s population. A total of 5,237 Vermonters were killed in battle or died from wounds, disease, or accidents. Vermont would spend nearly ten million dollars on the war.

Images: (top) Battle of Cedar Creek painting (1871-4) by Julian Scott, shows a Civil War battle in Virginia's Shenandoah Valley on Oct., 1864, when the First Vermont Brigade rallies to reverse a Union retreat. The painting is on view at the Vermont State House.

The Raid on St. Albans

Contribution of Black Vermonters to the Civil War