Compared to the rest of the northeast, railroads came late to Vermont. Vermont chartered railroad corporations in the early 1830s but construction didn’t start until over a decade later. Competition between the two major lines, the Vermont Central and the Rutland Railroad, blocked and delayed attempts to develop direct connections to the east coast and the west. Many capitalists saw the state only as a pass-through and invested in Vermont railroads primarily to connect Boston and New York to the Great Lakes and beyond. But Vermont’s most prominent businessmen, politicians, and industrialists understood the importance of railroads and worked hard to get them built. 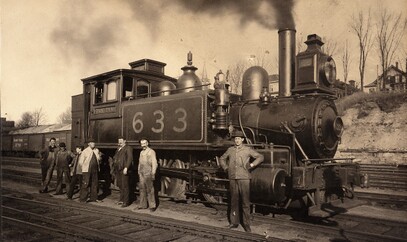 Construction of the Vermont Central Railroad running from Hartford to Painesville (present-day Essex Junction) began in 1845. A short time later, construction started on the Rutland Railroad, which terminated in downtown Burlington. Both were completed in 1849. Many smaller lines were proposed but not constructed and the business of building railroads was fraught with bankruptcies, corruption, and mismanagement. Even so, by the end of the nineteenth century, most Vermonters lived within close proximity of a railroad, and the Iron Horse had a profound impact on every aspect of life in the state for decades.

Railroads, in addition to waterways like the Champlain and Erie Canals, made it easier to travel west. Vermont’s population growth lagged behind other states as many of her sons and daughters moved west seeking cheaper land and new opportunities. In a few instances, Vermonters purchased large tracts of land and moved west together creating new communities such as Vermontville, Michigan. Many native Vermonters such as politician Stephen A. Douglas, inventor John Deere, and educator John Dewey achieved great success in their adopted states. 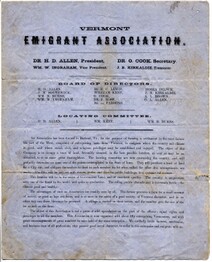 The small increase that did occur in Vermont’s population was due to the influx of new immigrant groups. The Irish came to Vermont in large numbers to work on the railroads. As transient workers and Catholics, they were not widely accepted. Other groups such as Italians, French Canadians, Swedes, Scots, and Welsh, were also recruited to the state to work in Vermont’s expanding industrial sector. This influx helped to keep Vermont’s population stable but changed social dynamics. The majority of these people settled near their work in growing urban areas, and their customs, languages, and religions set them apart from Yankee Vermonters.

(bottom) The Vermont Emigrant Association printed this flyer in the mid-1800s seeking people to invest and move to land they were exploring for settlement in Iowa.