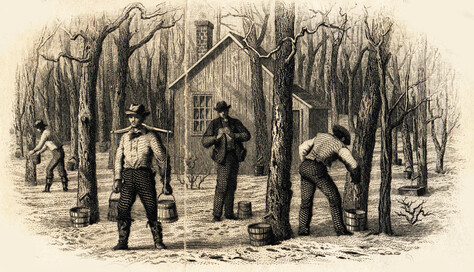 Maple sugar was a major cash commodity for Vermont farmers during the nineteenth century. Just before the Civil War, cane sugar lost its appeal to most northerners due to its association with slave labor, and during the war it became scarce. As a result, sugar made from maple sap gained in popularity. In 1870, Vermont, the leading producer in the country, reported making nine million pounds of sugar. By 1890 Vermont was refining fourteen million pounds of sugar—one-quarter of the United States’ total supply. Changes in tariff laws in the late 1880s caused a decrease in cane sugar prices, and efforts to keep maple prices on an equal footing failed. From that time on maple sugar became a luxury for everyone except those who made it. 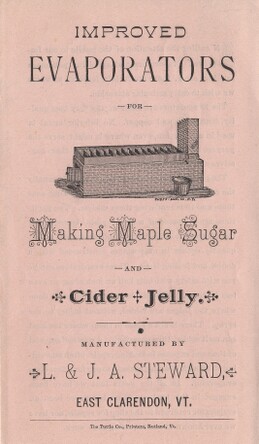 At the turn of the twentieth-century syrup became the predominant maple product, with Vermont making 160,000 gallons in 1900. Passage of the federal Pure Food and Drug Act of 1906 prohibited the practice of adding glucose to maple syrup, further bolstering the industry. In 1920 Vermont produced three and a half million gallons of syrup, which by then had become a popular table delicacy. The tools and machinery Vermonters invented for tapping the maple trees and then boiling down the sap into syrup became another profitable industry from the late nineteenth century onward. Vermont to this day leads the nation in the production of maple syrup and its farmers continue to depend on the money earned from this spring harvest.

Images: (top) This image of maple sap collecting is on a license for sugar production issued by the federal government in 1893.

(bottom) Steward’s was one of several Vermont companies that made equipment for maple sugar producers in the late nineteenth and early twentieth centuries.