The greatest period of growth in Vermont agriculture occurred from 1850 to 1880. By the end of that era there were over 35,000 farms in the state, the most in its history. Cows surpassed sheep in importance by midcentury and dairy products became the foundation of Vermont’s agriculture. In a time before refrigeration, milk was turned into cheese or butter before it spoiled. The best year for cheese during this period was in 1869, when 4,830,700 pounds were produced. But butter making was the activity that would dominate the dairy industry into the early twentieth century. With the importation of better breeds of cows, scientific innovations, and growing demand, Vermont butter won an international reputation for quality.

As their dependence on cows increased, Vermont farmers bred and raised animals that fit their needs. As with sheep earlier in its history, Vermont became known for its championship dairy stock. Though some farmers kept Holstein and Ayrshire herds, the Jersey breed pre-dominated in Vermont into the mid-twentieth century. A Jersey herd from West Randolph won first prize for its butter at the Paris Exposition in 1890 and again at the World’s Columbian Exposition in 1893.

The Vermont Dairyman’s Association was formed in 1869, the first association of this type in the country, and it was a vocal and successful advocate for scientific breeding practices and the development of new technology. Its efforts were supported by the work of the State Agricultural College at the University of Vermont. After the successful introduction of the centrifugal cream separator and the Babcock tester in the 1890s, Vermont’s dairy products were rated as some of the best in the world.

Vermont farmers were also prolific inventors. Their inventions ranged from beehives and corn grinders to horse powers and hay rakes. Many of these machines were patented and manufactured for sale beyond Vermont’s borders. Successful Vermont manufacturers included A.W. Gray of Middletown Springs, Stoddard Manufacturing of Rutland, and the Vermont Farm Machinery Company of Bellows Falls, which made the well-known Cooley Creamer, Davis Swing Churn, and the U.S. Cream Separator. 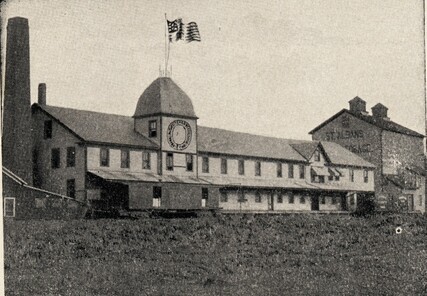 Creameries were agricultural factories, manufacturing operations where farmers took milk or cream and had it made into butter. Creameries changed over time, as did farm operations. In the 1880s and 1890s separators were often located at creameries and farmers brought whole milk there to skimming stations. The cream skimmed from the milk was then made into butter. By 1900 separators were typically part of farm operations and farmers sent cream directly from the farm to the factory. The state’s first butter factory was the North River Creamery in Jacksonville, Vermont, started in 1886. The Franklin County Creamery Association in St. Albans was rated as the world’s largest butter factory in the 1890s, making 25,000 pounds of butter a day. By 1915 there were nearly 300 butter factories in Vermont, the year in which annual production peaked at 20,423,529 pounds.