After visiting wounded and sick Vermont soldiers at hospitals outside Washington, DC in 1862, Governor Frederick Holbrook had an idea. He suggested to President Lincoln and Secretary of War Stanton that soldiers would recuperate more quickly at home. Lincoln and Stanton feared increased casualties due to travel and a higher desertion rate by soldiers once at home. Holbrook managed to overcome their fears and they agreed to set up hospitals, far from the battlefields, on a trial basis. 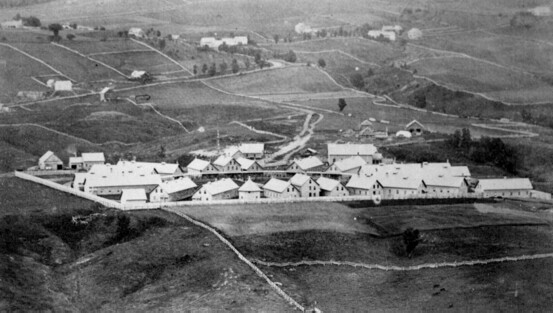 Brattleboro's Civil War hospital was built on land today used by the town's high school. Vermont was the site of three of the 192 general hospitals that eventually were built around the country during the Civil War. A U.S. military hospital already existed in Burlington, and new facilities were designed for Brattleboro and Montpelier. Many of the soldiers treated in these institutions were from Vermont. These men and their families reaped the greatest benefit from this new arrangement. Vermont’s hospitals proved to be very successful. During their three and one-half years of operation, 8,574 patients were treated. Only 175 of these men died and 66 percent returned to duty.

Image: Sloan Hospital in Montpelier was situated on land near present-day College Street.