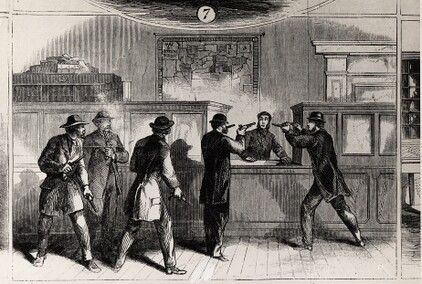 Twenty Confederate soldiers attacked the village of St. Albans, Vermont on October 19, 1864. The raid was planned to avenge assaults on Southern cities, to obtain money needed by the Confederacy, and to cause confusion and panic on the Northern border. The raiders robbed three banks of more than $200,000, killed one citizen and wounded two others, stole a number of horses, and tried unsuccessfully to burn down the town. The Confederates, with Vermonters in close pursuit, escaped across the Canadian border. Eventually several were captured and arrested by Canadians.

The attack initially caused panic at the local, state, and federal levels. Plans were quickly devised to send a special troop train to St. Albans. But, when it was learned that this raid was a minor, isolated incident, a smaller military contingent was dispatched to guard the city and calm its citizens. 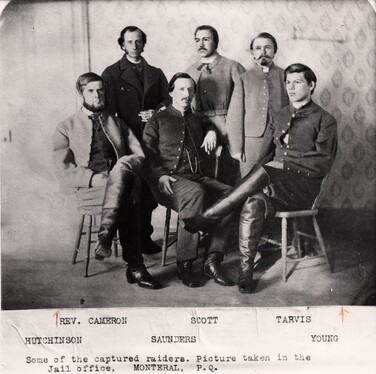 Rumors of more attacks along the border stirred up fears until winter. Americans were outraged when the Southerners were initially freed on a legal technicality and sent the stolen money south before they were rearrested. Canada, a British colony, further angered the United States when its courts refused to extradite the raiders and eventually released them. This incident weakened the already strained relationship between America and Great Britain, resulting from the latter’s continuing sympathies for the Confederacy.

Images: (top) Illustration of the raid printed in Frank Leslie's Illustrated Newspaper on November 12, 1864, almost a month after the event.

(bottom) Confederate raiders photographed after their capture in Canada.