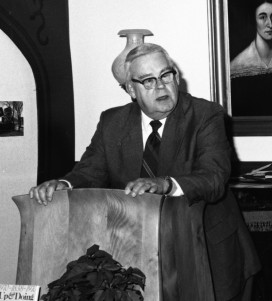 Born in St. Johnsbury, July 16, 1921, Weston A. Cate, Jr. had a life long interest in printing and journalism. While in high school he set up a print shop and published a neighborhood newspaper, and graduated from Bates College in Lewiston, Maine. From 1947 to 1958, he taught high school English in White River Junction, and he was a part-time reporter and columnist for the Valley News. In 1958, he moved to Montpelier to become executive secretary of the Vermont Education Association, a post he held until 1974. From 1975 to 1985, he was executive director of the Vermont Historical Society.

After retirement, his passion for history and publishing led him to become a dealer in Vermont book and ephemera with his homespun company, Adamant Books. He was the author of Up and Doing (a history of the Vermont Historical Society) and Forever Calais (a history of Calais). He received the Lifetime Achievement Award from the Center for Research on Vermont in 2006. He passed away in 2010.

While he was happiest when surrounded by his family, he also believed in civic responsibility; over the years he served as town moderator in Hartford; school board member in Montpelier; and town moderator, planning commission member, and selectman in East Montpelier, among other positions. He was a leader in many organizations, including the Calais Historical Society, the Green Mountain Folklore Society, the Community of Vermont Elders, and the Vermont Retired Teachers Association.

He was a frequent public speaker and contributed many op-ed columbs and letters to the editors of local newspapers, often offering wry reflections on Vermont history and what it means to live in Vermont. For many years the radio broadcast of his reading of T'was the Night Before Christmas was a tradition for local families.

Related Pages
Cate Fellowship Past Winners Back to Weston A. Cate, Jr., Fellowship