Train wrecks in the nineteenth century were usually caused by human error or poor judgment. Public outrage at the loss of life often led to change and frequently to legislative reform of railroad operations. The use of telegraphs to improve communications, air brake technology to stop trains more quickly, and new heating systems that lessened fire hazards, were all hastened after train disasters. 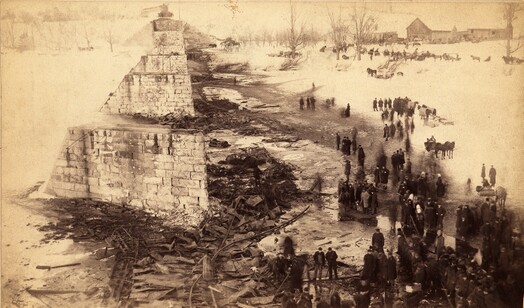 One of the most notorious train wrecks occurred in Vermont early in the morning on February 5, 1887. The Montreal Express derailed just as it was going onto the bridge over the White River near West Hartford. As the engineer stopped the locomotive halfway across the bridge, he looked back to see most of the train lurch, turn over, and fall into the river. At twenty degrees below zero, the ice on the river was thick enough to hold the wreckage, but the fire that engulfed the train and trestle bridge soon consumed trapped passengers not killed by the fall. In all thirty-four people died and forty-nine others were injured.

Investigation proved that a flawed track could not have been discovered during the previous night’s inspection. The fire, though, was another matter. The use of antiquated coal stoves and kerosene lamps instead of newer steam and electricity doomed many passengers. The federal Railway Appliance Act of 1893, which regulated safety standards for train appliances, is credited with reducing the toll in railroad accidents by sixty percent.

Image: Photo showing the aftermath of the 1877 wreck of the Montreal Express.