Considerable excitement was aroused in our town on Friday last, by sudden requisition of the Sheriff, Mr. Ferris, for an armed force, to aid him in the execution of legal process which had been forcibly resisted by the laborers on the Central Railroad.- Burlington Free Press, July 10, 1846

Two hundred Irishmen building a difficult stretch of the railroad in Bolton walked off the job on July 3, 1846. After not being paid for three months they had had enough. Angry and frustrated, they blocked local roads and took an officer of the Vermont Central Railroad hostage. Local sheriffs, unable to control the situation and fearful of escalating violence, turned to the state. A militia company and an armed volunteer fire company from Burlington were called in and some of the rioters were arrested. Order was restored only through the intervention of a Burlington Catholic priest, who persuaded the men to disperse and helped free those arrested. 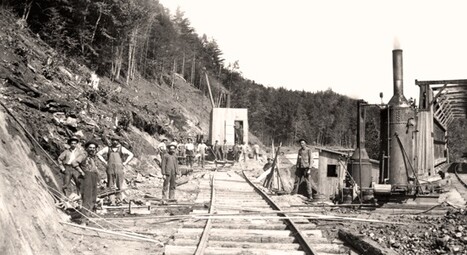 The incident only fueled the fears and reinforced the stereotypical images of these new immigrants held by the Vermont establishment. It was a no-win situation for these men, who were never paid and instead got a bitter taste of how many non-Yankee minorities would be treated by authorities. Irish immigrants continued to move to Vermont to work on the railroad. Other immigrant groups followed—French Canadians, Italians, Scots, Welsh, and Swedes—to work in the mills, quarries, and factories that developed along with the railroads.