Funded by the Vermont Humanities Council. The following materials were compiled in 1997. 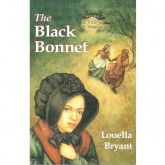 Louella Bryant is the author of The Black Bonnet which is a story about two sisters who escape slavery in Virginia in the late 1850s. They make their way to Burlington, where they stop to rest before completing their trip to Canada. Ms. Bryant has provided  the Vermont Historical Society with a list of student activities and suggested projects which include links to related Civil War and Abolition topics.