The Rebel and the Tory 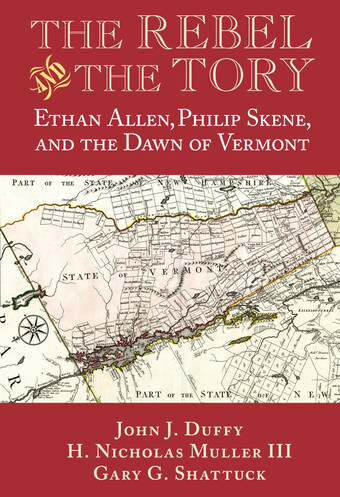 The Rebel and the Tory: Ethan Allen, Philip Skene, and the Dawn of Vermont shines a fresh light on the long-accepted origin story of Vermont, which has remained static for about 200 years. The Ejectment Trials of 1770, when settlers and leaders of the New Hampshire Grants turned from petitions and court proceedings to violent resistance against legitimate New York authority, are considered a critical inflection point by many historians. No historians have ever read the transcripts of the Ejectment Trials—until now. The reality of the Ejectment Trials turns out to be markedly different from their portrayal for the past two centuries. The authors also restore Philip Skene, a principal player scheming with Ethan Allen and other revolutionaries to create a new colony with the capacity to resolve the Grants controversy, to his rightful place at the center of Vermont’s founding.

Purchase the book online, at our museum stores in Montpelier or Barre, or at select booksellers in Vermont.

The Journal of The American Revolution: Book Review by Gene Procknow

Related Pages
Print Town: Brattleboro's Legacy of Words Secrets of Mount Philo The Law of the Hills The Problem of Slavery in Early Vermont Seven Years of Grace Moses Robinson and the Founding of Vermont Uncommon Law, Ancient Roads, and Other Ruminations on Vermont Legal History Repeopling Vermont Discovering Black Vermont Back to Publishing Program