Moses Robinson and the Founding of Vermont 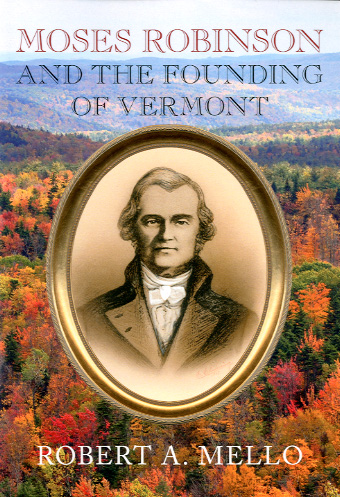 In this full-length biography, Superior Court judge, Robert A. Mello restores Moses Robinson to his rightful place as one of the most significant figures in the founding of Vermont. Robinson was a leader of the revolt against New York, one of Vermont's agents to Congress in charge of negotiating statehood, the architect of Vermont's legal system, and served as the state's first chief justice, governor for a year, and then as its first U.S. senator. This book invokes new thoughts about Vermont's complicated beginnings.

Purchase the book online, at our museum stores in Montpelier or Barre, or at select booksellers in Vermont.

Related Pages
Secrets of Mount Philo The Rebel and the Tory Print Town: Brattleboro's Legacy of Words The Law of the Hills The Problem of Slavery in Early Vermont Seven Years of Grace Uncommon Law, Ancient Roads, and Other Ruminations on Vermont Legal History Repeopling Vermont Discovering Black Vermont Back to Publishing Program