Ethan Allen is probably the most well-known player in the Grants vs. Yorkers events that led to the establishment of Vermont, as well as early Revolutionary War activities in the area.

Born in Litchfield, Connecticut in 1738, he bought land in the New Hampshire Grants in 1770. Allen and his cousin Remember Baker started the "Green Mountain Boys" to protect their land from Yorker claims. 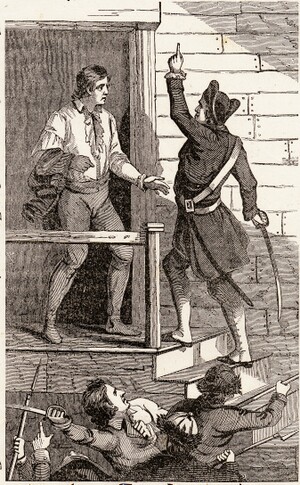 In 1775, Ethan Allen, Benedict Arnold, and the Green Mountain Boys captured Fort Ticonderoga from British soldiers. Later that year, Allen tried to attack Montreal but was captured by British soldiers. He was held on a prison ship for three years during the Revolutionary War.

Upon his release, Allen returned to Vermont.  He lobbied Congress for Vermont to become the 14th state, and when that wasn’t successful he participated in controversial negotiations over the possibility of Vermont becoming a separate British province.

Allen wrote extensively about his exploits, as well as philosophical treatises and documents relating to the politics of Vermont's formation. Ethan Allen and his family moved to Burlington in 1787 where they farmed land along the Winooski River. He died in 1789.

Alongside Allen's own myth-building, Daniel P. Thompson's 1840 novel The Green Mountain Boys most helped to establish him as a larger-than-life historical figure.

Related Pages
Back to New Frontier: The Green Mountain Boys