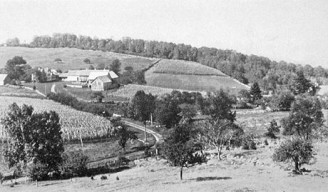 Weathersfield was first settled as a New Hampshire grant on August 20, 1761. The name Weathersfield originates from Wethersfield in Essex, England, where the name originally referred to a field associated with a wether (a castrated ram). Wethers were often trained to lead a flock of ewes to and from pasture. Vermonters inserted an "a" into the town name, losing its old pastoral meaning. Coincidentally, Weathersfield would become known for its sheep that made it one of the most prosperous towns in the state in the early 19th century.

Before settling in Weathersfield, Vermont in 1812, William Jarvis (1770-1859) had been a successful merchant and the United States Consul to Portugal. When he came to Vermont he was wealthy and politically well known in both New England and Washington, DC. William Jarvis played an integral part in introducing Merino sheep to the United States and subsequently in the development of the sheep herds in this country. The Spanish government had held on tight to their Merino sheep until Napoleon Bonaparte invaded Spain. Rather than allow Napoleon to squander the Merino flocks, the Spanish lifted the blockade on exporting Merinos. William Jarvis, as Consul, took advantage of this opportunity and successfully introduced Merino sheep to America. 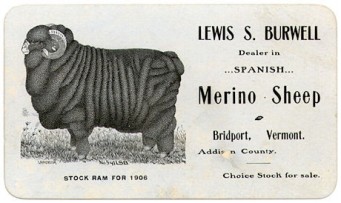 The successful introduction of the Merino herds in Vermont resulting in "merino mania" and the growing demand for wool by the textile industry of New England led to a change in farming practices. Because sheep required large grazing areas, small family farms had to be consolidated into larger farms. Also, many farms became dependent on one product -- wool.

By 1837 there were over one million sheep in Vermont. Changes in tariff laws created economic booms and busts for sheep owners. Wool prices dropped from 57 cents per pound in 1835 to 25 cents per pound in the late 1840s. Vermont sheep farmers were also suffering from competition from farmers out West. The average annual cost of keeping a sheep in New England was $1.00-2.00 a head, while farmers further west were spending 25 cents a head. Many Vermont sheep farmers suffered great financial loss during this period. Today there is little left of the village of Weathersfield except a few houses and the beautiful old stone church, which was built in 1837 during the peak of "merino mania." 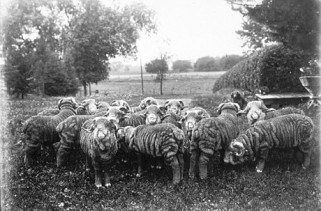 Merino sheep are noted for their fine wool, hardiness and herding instincts. Having a cleft lip allows these sheep to graze on just about everything. Therefore, thousands of acres of poor, rocky soil make fine grazing land for merinos. Since sheep required extensive pastures for grazing, many small farms were consolidated into larger ones.

From late April or early May until November the sheep were kept in the pastures. After the first frost until the following spring they were kept under shelters with fenced yards and fed hay and oats or corn. Owners were always careful to provide salt and plenty of water for the animals. As with any farm the workers also had to do planting, harvesting, cutting, and slaughtering.

What was it like to work for William Jarvis?

Jarvis employed several young men who lived and worked on the property. During especially busy periods, he would also hire local men on a temporary basis. Jarvis also used a network of merchants in America and England who assisted him in selling his wool throughout the U.S. and Europe.

Sheep raising in Vermont, like most agricultural occupations, had its busy and slow seasons. The two most intensive work periods were when lambs were born in the spring and then in the early summer when the sheep were sheared. Before a sheep’s fleece could be cut it needed to be washed. After bathing, the sheep were left for a few days to dry and to let some natural oils build up on their fleeces again. Cutting off the fleece required a special skill, especially with the wrinkled skin Merinos. The average shearer could shear 25 Merinos in a day and an exceptional cutter could do 35. After sheep were sheared they were marked with paint applied by wooden or metal brands.

Where did they live?

Many young men that worked at Jarvis’ farm boarded with the family. The 1840 census lists 12 males in Jarvis’ household as employed in agriculture, while the 1850 census lists only 4 farm workers in the household. Merchants throughout the U.S. and Europe kept in contact with Jarvis through written correspondence.