Slavery was the most contentious and inflammatory issue Vermonters confronted in this era. Vermont had abolished slavery within its borders in 1777 with the adoption of the state’s constitution. Many Vermonters were initially content to leave the south alone and only supported the Free Soil Movement which prohibited the expansion of slavery into new western territories. Other Vermonters supported colonization, the resettlement of freed slaves to the African country of Liberia. 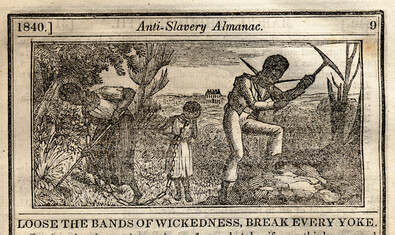 Immediate abolition of slavery was seen as a radical movement that was divisive to the Union. Abolitionist meetings were sometimes disrupted. In 1832 abolitionist Samuel May was driven off the stage while trying to speak in Montpelier. But attitudes began to change in the 1830s. Antislavery societies, supported by some churches, organized throughout the state and worked tirelessly to educate the public about the horrors of slavery. When more churches began to preach the view that slavery was a sin, people were finally convinced of its evils. By the time Abraham Lincoln was elected president in 1860, the vast majority of Vermonters believed that slavery should be abolished throughout the United States.

CLARINA HOWARD NICHOLS was a newspaper editor from Windham County. She is best known in Vermont as a crusader for women’s causes. In 1852 she became the first woman to be allowed to speak publicly in the State House, where she addressed her audience about women’s rights and their unequal status. Like other women of the era, Nichols was also an abolitionist. She actively participated in the Free Soil movement when she moved with a group of Vermonters to Lawrence, Kansas. There they worked to make sure that when Kansas entered the Union, it would be a free soil state that didn’t allow slavery. “Bloody Kansas,” as it was known, became a battleground between abolitionists and supporters of slavery. Nichols continued her efforts for women’s suffrage in Kansas, unfortunately with the same unsuccessful outcome as in Vermont. She eventually moved on to California, where she spent the rest of her life.

LOUDEN S. LANGLEY of Hinesburg, Vermont wrote a series of letters to newspaper editors expressing his views in the 1850s and 1860s. He identified himself as a man of color. On April 27, 1854, he lashed out at the Vermont Colonization Society for their vain attempts to send former slaves to the new colony of Liberia in Africa. He warned his fellow free men of color to beware of the colonizationists, as they were prejudiced against blacks. He recommended that the Society should “lend their influence in favor of giving us ‘liberty and equal rights’ in the land of our birth.” Langley would later write about the unfair treatment he and his brothers received while serving in the famous 54th Massachusetts Colored Regiment during the Civil War.

Image: Abolitionists used illustrations like this one to show the horrendous conditions under which slaves lived.

Related Pages
Back to Building Communities: Choose a Cause, Make a Choice