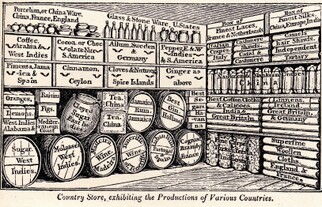 General stores became places where Vermonters met to exchange goods they grew or made at home for items they couldn’t produce themselves. Vermonters had noticeably increasing consumer choices during this era. The items in this store represent what was available to Vermonters between 1820 and 1860. Mass production made goods cheaper, and better transportation systems provided access to local markets. Merchants advertised a wide selection of goods, some made locally, others from Boston and New York, and, in some instances, imported from distant places such as Europe, China, and India.

New factories sprang up in many villages; items such as stoves, pottery, and glass were mass-produced within Vermont. With the factories came a new system of work. Employees were expected to begin and end work at a set time, and were paid cash wages for the hours they worked. They were not given time off to hay or harvest crops. These were full-time, year-round jobs, not seasonal employment to fill in when farm work was slow. Many large, leather-bound ledger books from these stores survive in the Vermont Historical Society collections. They show the forms of credit that made purchases possible in a time before a stable currency system. Other accounts were maintained by the factories to keep track of employees’ work and wages.

The American System in Windsor 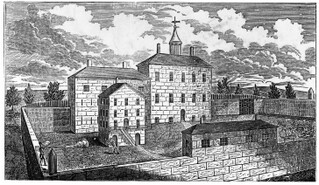 The town of Windsor’s initial success as an industrial center was partly due to the use of prison labor. Asahel Hubbard, founder of the National Hydraulic Company, was appointed warden at Windsor Prison and used convicts to make his revolving hydraulic engine. Nicanor Kendall, Hubbard’s son-in-law, paid inmates thirty-two cents a day in the mid-1830s to produce his famous underhammer rifles.

Nicanor Kendall, Richard Lawrence, and Samuel Robbins became partners in 1844 and won a government contract to make 10,000 rifles. These were not made at the prison, but in a new brick armory built by the Robbins, Kendall & Lawrence Company. After Kendall left the company in 1847, Lawrence and Robbins became famous for introducing the use of interchangeable parts in the manufacturing process, a practice known as the American System. Before they went bankrupt in 1857 due to the loss of a major contract, the company employed over 150 men. This firm’s highly trained employees went on to found Vermont’s important machine tool industry in the late nineteenth and twentieth centuries.

Though pottery was produced throughout Vermont, the most famous firms were located in Bennington and are collectively known as “Bennington Pottery.”  The Norton family started making earthenware pottery in Bennington at the end of the 18th century.  Soon the family expanded to stoneware, the gray jugs and storage vessels you see here.  Stoneware, the all-purpose storage of the day, was a very lucrative business and only went out of style as glass canning jars and later tin cans became cheaper and more prevalent.  Stoneware labeled “Bennington” and “Norton” was produced into the early 20th century.

In the mid-19th century, the Fenton family joined with the Nortons and produced fancy glazed pottery, often red, brown, and yellow though found in other colors, meant to rival identical designs imported from England.  Called the United States Pottery Company, this firm had the honor of representing American pottery manufacturers at the 1853 Crystal Palace Exposition in New York, often referred to as the second World’s Fair.

Four glassworks operated in Vermont during the first half of the nineteenth century. The Vermont Glass Factory opened in 1813 and had operations in Salisbury on Lake Dunmore and in East Middlebury. Both operations primarily made window glass, though the East Middlebury works probably made bottles and other wares as well. Due to fire and financial problems, the initially successful company was out of business by 1817.

The Lake Dunmore Glass Company opened on the site of the older glassworks in 1832 and stayed in operation until 1839. Like its predecessor, it manufactured window glass, though several examples of bowls and bottles made by its workers survive.

The largest of the four companies was the Champlain Glass Works, which opened in Burlington in 1827. The large works employed 100 people in making window glass and bottles. During the 1840s it successfully marketed its wares in the west, using the Champlain and Erie canals. Without enough wood to fuel its furnaces it closed in 1850.

Vermont Abenaki families from ancient Indigenous communities such as Missisquoi and Koas, as well as from smaller and more dispersed enclaves in the northeastern and southeastern parts of the state, were extremely important to early 19th century Vermont commerce and transportation. Travel in the summer on lakes and rivers took place in locally produced bark canoes, while winter journeys were often made on snowshoes while pulling bentwood toboggans built by Abenaki. Indigenous-made utilitarian and decorative ash splint baskets held everything from produce to bonnets and could be found for sale in many general stores.

(bottom) Image of Windsor prison in the early nineteenth century.